*Disclosure: I received a “Nerf Rival Hypnos XIX-1200” through the Amazon Vine Program in exchange for my review.  All opinions are 100% my own.

Summer is all about making memories!  This summer many of my son’s memories will be of epic Nerf Wars with his friends. The “Nerf Rival Hypnos XIX-1200” is another of the Nerf blasters in my son’s collection. It’s a bit heavy for him to use, but it’s a fun option for the older kids to use. 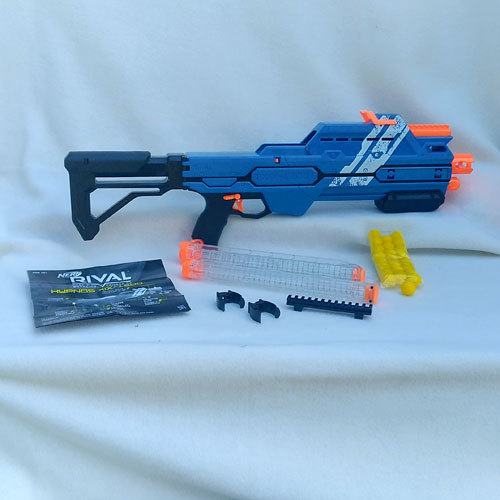 The tactical rail and two clips need to be snapped onto the side of the blaster.  There are two tactical rails on the blaster, one located on the top front and the second along the side, where the extra magazine is stored. 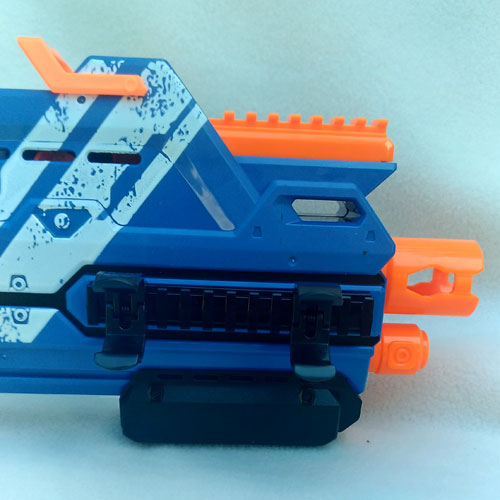 The suggested age is 14+, younger children will have difficulty using this blaster.  It shoots consistently 90+ feet.  The pump-action requires some strength to use.  The blaster is quite heavy, especially with the second magazine clip stored on the side and other accessories.

The blaster measures 29.25 inches tip to tip when in its extended mode. 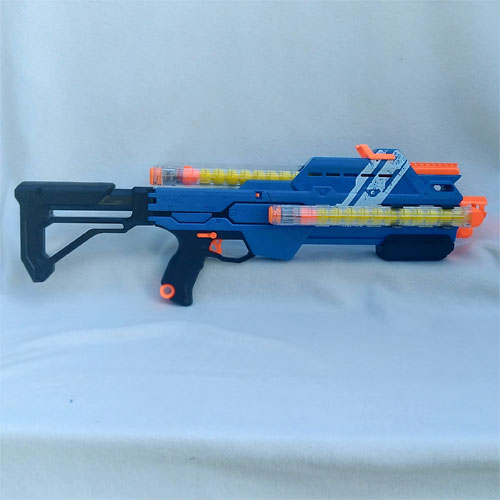 The blaster has a folding stock for battles in close spaces, portability and storage. To fold the stock press the orange button on the side and lock it to the side. When the stock is folded the blaster measures approximately 21.5 inches.  Be sure that you have stored the magazine on the side far enough ahead so that the stock has enough room to fold. 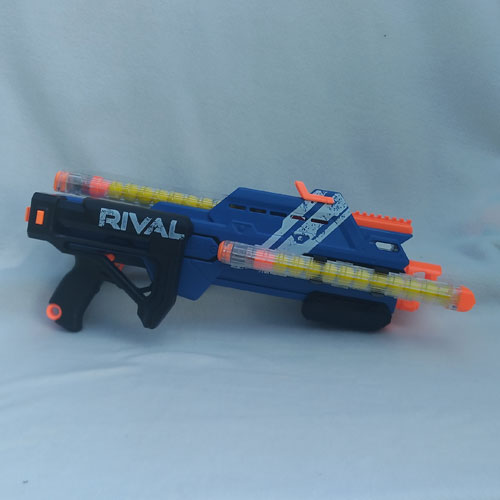 The magazine holds 12 rounds, if you put any more than that they will not work properly.  The magazine release is located on the back of the gun.  Simply press it down and the magazine will release and you can quickly reload.

The jam door is located on the back of the blaster and it will not fire if the door is left open.

There is a trigger lock on either side of the blaster for safety.  Always put the tricked lock in a locked position when you are not using the blaster.

When playing outdoors the wind tends to blow your dart off track quite easily.  The rounds are small, but bright yellow which makes them slightly easier to find.

This “Nerf Rival Hypnos XIX-1200” is a great blaster option for older children and those young at heart.