This has been the summer of epic Nerf Wars.  Several of the boys have the “Fortnight AR-L Nerf Elite Dart Blaster” and they gear up and head out to the playground for a Battle Royale – last man standing wins! The kids love to bring their Fortnite battles to life with this game inspired blaster replica. 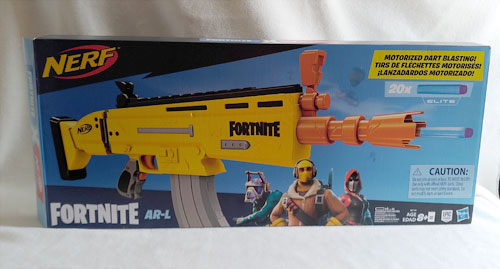 The “Fortnite AR-L Nerf Elite Dart Blaster” is quite large, measuring 30 inches from tip to tip.  The recommended age listed by the manufacturer is 8, but I feel is better suited for older children, 10 and over, because it’s size makes it difficult to use.

What is inside the “Fortnite AR-L Nerf Elite Dart Blaster” box?

The blaster replicated the look and colours of the blaster in the Fortnite video game. 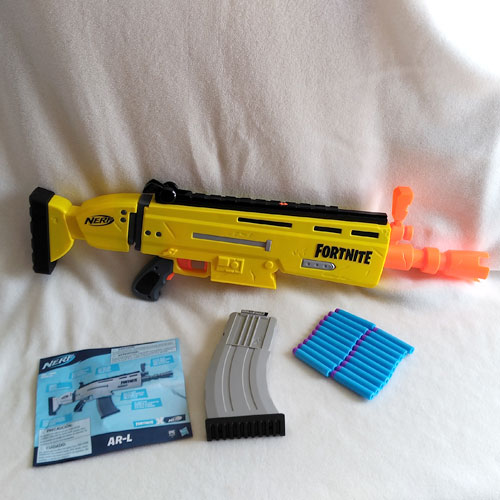 The ammunition clip hold 10  darts.  Do not overfill or your gun will not work properly.  There is no place to store extra ammo on the gun.  During play darts inevitably get lost, we used Nerf replacement darts and the fun continues on. Slide the clip into place and you will hear it click as it locks. To remove it you need to press on the orange button to release the clip. 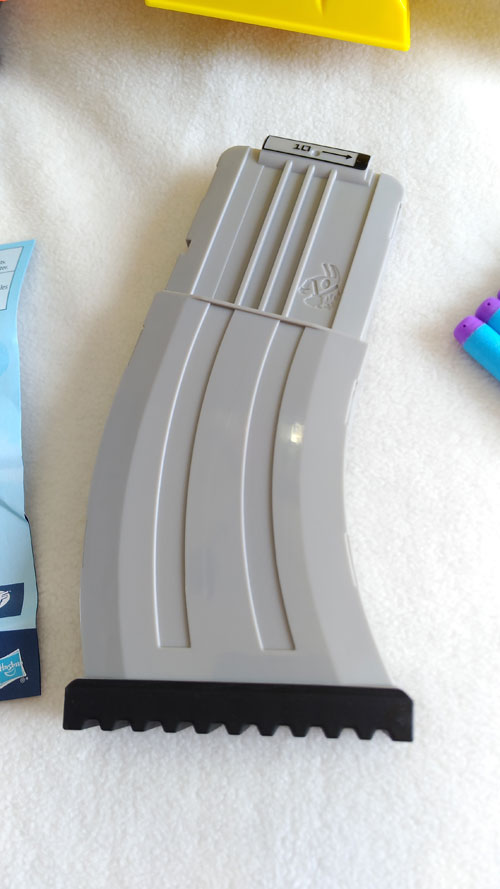 The blaster requires four AA batteries to work.  The battery compartment is located on the back of the gun and screws shut.  This is frustrating when your batteries die mid battle and you need to stop everything to replace them.

We consistently have issues with our gun jamming, even when using the official Nerf darts that came with the gun.  To remove the ammunition jam, you need to open the orange door located on the back of the gun and remove the offending dart.  Then ensure the door is completely closed again, or the gun will refuse to work.

When we first tried the gun it would not work and after opening and closing this door the gun because to work.

This blaster is motorized so it requires a little patience.  Press the secondary Rev trigger on the handle to start the motor. It will begin to make a whirring noise that starts slowly and begins to get faster.  The longer you hold this button in the more power your shot will have.  When you are ready to fire, press the trigger and the fun begins.

We found that the “Fortnite AR-L Nerf Elite Dart Blaster” shot consistently between 45 feet and beyond.  In idea conditions in a sheltered area with no wind the darts landed 66 feet away.

There are two flip-up sights to help you line up your shots.  We found that the aim wasn’t very true, and found we just aimed in the general direction and hoped for the best.

The gun rests comfortably against your shoulder and the handle is comfortable in my hand.  Both the Rev trigger and the Firing trigger are easy for my adult size hands to use, but my son who has much smaller hands finds it difficult to use.

The “Fortnite AR-L Nerf Elite Dart Blaster“ brings the fun of Fortnite into the real world.  Game fans will enjoy playing with this blaster.

*Disclosure: I received a complimentary “Fortnite AR-L Nerf Elite Dart Blaster“ through the Amazon Vine program in exchange for my review.  All opinions are 100% my own.