My son loves to challenge his body and mind. He is always trying to solve the next great riddle or see how fast he can ride his bike. The “Fantastic Gymnastic Game Vault Challenge” appeals to his competitive nature as he attempts to best his competition or his own high score. 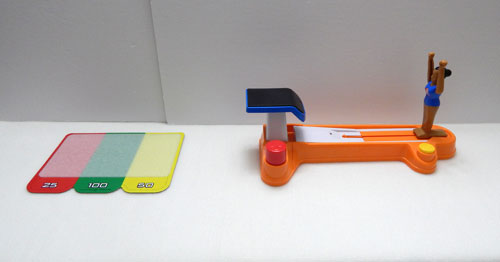 Players time their speed and strength to launch the gymnast down the vault track in the “Fantastic Gymnastics Game Vault Challenge”. Stick the perfect landing to score the maximum points for the win!

What does the “Fantastic Gymnastics Game Vault Challenge” include? 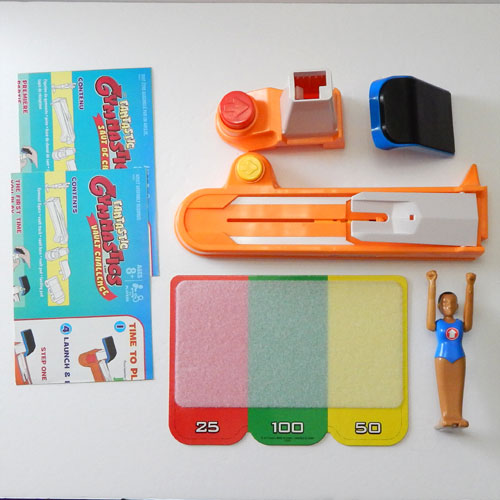 Setting the Game Up

The first time you play you need to set up the vault by inserting the pad into its base. This is a one time set up and doesn’t come apart.

Press the white launcher down if it is raised so the gymnast can be launched onto the vault pad. Push down on the white slider on the gymnasts to lock the pin and insert it into the yellow hole in the launch track. Then pull the gymnast to the start of the track and adjust her arms to your favourite position.

This game recommended for children aged 8 and up and is for 1 or more players.

What did we think?

Set up of the game is simple.  Attach the vault base to the vault run, place the landing pad and position the gymnast and the game is ready to play.

The first thing we discovered is that it needs to be played on a hard surface. I placed a tablecloth on our table to protect it during gameplay which prevented the game from working properly. After moving to the kitchen floor the game functioned much better.

The gymnast is difficult to actually land on the landing pad in any form of “perfect landing”. More often than not, the gymnast would land and topple over because of this we chose to modify the rules to suit our style of play. After a while, we just abandoned all rules and just tried to see how far or how high we could launch the gymnast.

After attaching the vault pad to the base it no longer fits back into the box which makes it difficult to store on the games shelf. 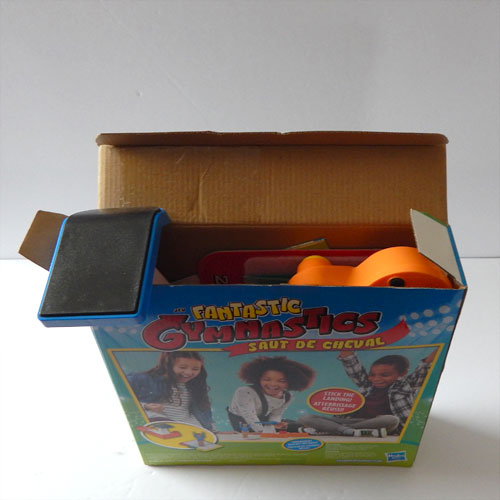 My children enjoyed the game for a few minutes, but found it frustrating and quit playing after about 10 minutes. They have returned to the game a few times later, but it didn’t hold much enjoyment for them.  I feel this game is best enjoyed in a tournament style at family functions or birthday parties, but not as a game to be played every day.

*Disclosure: I received a complimentary copy of “Fantastic Gymnastics Game Vault Challenge” through the Amazon Vine Program in exchange for my review. All opinions are 100% my own.