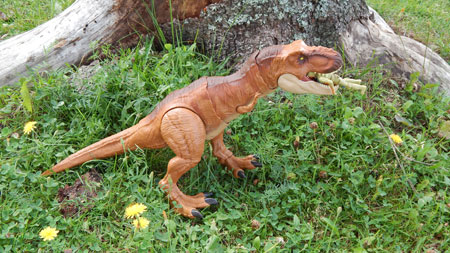 The “Jurassic World Thrash ‘n Throw Tyrannosaurus Rex Figure” is one of the fan-favourite characters from the original Jurassic Park movies.  It roars, stomps and bites and brings the excitement and wonder of dinosaurs to your child’s playtime. 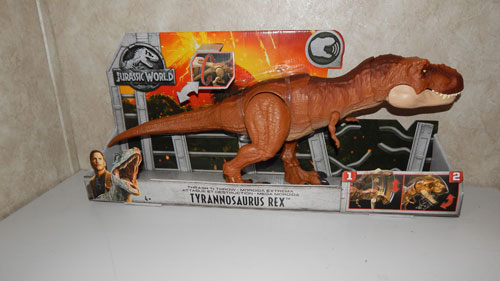 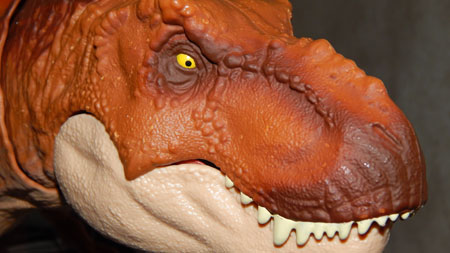 The dinosaur’s legs are difficult to move. Initially, I didn’t believe they were moveable at all until we accidentally dropped it and the leg moved backward. The feet can rotate. The dinosaur is difficult to balance and remain steady. On the bottom of the foot is the button for the stomping sound. 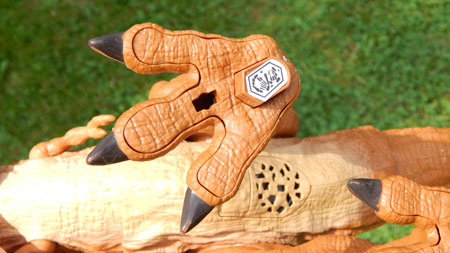 The dinosaur’s tail activates various features. When you lift her tail the dinosaur roars  and opens her mouth ready to chomp down on unsuspecting victims. When you move the tail from side to side she will thrash side to side and throw her victim away.

The thrash and throw feature isn’t without its flaws. It makes the dinosaur unsteady and is awkward to actually chomp down and grab things. It takes patience and practice and was very difficult for my son to successfully do. He pinched his fingers several times until he finally made it work. When he finally was able “chomp and thrash” my son was excited to show his new dinosaur off to his friends. 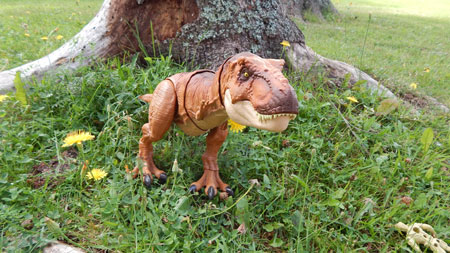 The  “Jurassic World Thrash ‘n Throw Tyrannosaurus Rex Figure” is an attractive dinosaur that would appeal to dinosaurs lovers of all ages.

*Disclosure: I received a complimentary “Jurassic World Thrash ‘n Throw Tyrannosaurus Rex Figure” through the Amazon Vine Program in exchange for my review. All opinions are 100% my own.