Camping season has arrived! The children and I are excited to be out at the campground exploring the great outdoors. Each summer the kids are allowed to pick a few toys to take with them to the campground. My daughter has chosen to take her “Princess Celestia Glitter and Glow” pony with her this summer. Already the two of them have gone on amazing adventures that only my daughter can imagine! 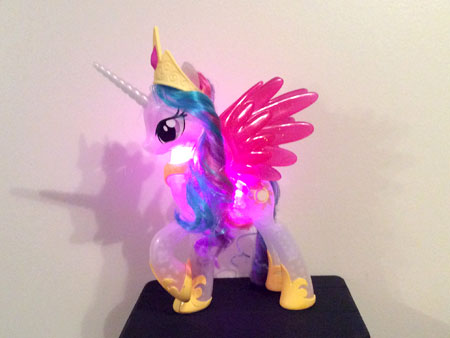 “My Little Pony Princess Celestia Glitter and Glow” is made from hard translucent plastic. Her head moves side to side and her wings can also be re-positioned. I was expecting more movement from them, they are wings after all, but they only move slightly.  She stands approximately 11 inches high, which is taller than many of my daughter’s other ponies. This makes it difficult for my daughter to play seamlessly with “Princess Celestia” and her other toys.

“Princess Celestia” features lights that change colour. The are turned on by pressing the button contained in her beauty mark. They light up in different combinations. My daughter couldn’t wait to hide in a dark little cubby to test out the lights. It requires 3 LR44 batteries to enable the lights to work, which are included.

The crown and necklace are removable. The crown slips off easily and has been lost on several occasions. The necklace is harder to remove. We are disappointed to discover that the paint has worn off on her eyelashes already.

Her hair is long and can be brushed with the provided comb. My daughter had taken “Princess Celestia” outside to the playground and also to bed, and the hair is still quite manageable. My daughter loves to wrap her mane around her fingers to create a cascade of ringlets. 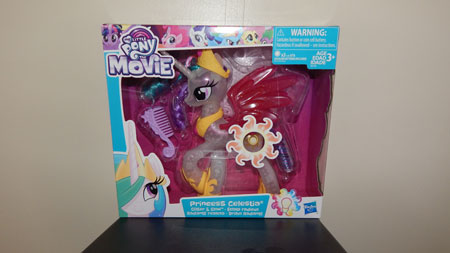 I personally was disappointed with the toy, expecting a little more from it based on the price tag. The toy isn’t designed for me, with my lack of imagination. “My Little Pony Princess Celestia Glitter and Glow” is created for someone just like my daughter, who has a love for anything “My Little Pony” and an amazing imagination.

*Disclosure: I received a complimentary “My Little Pony Princess Celestia Glitter and Glow” through the Amazon Vine Program in exchange for my review. All opinions are 100% my own.