I love the quote, “Always be yourself…unless you can be Batman, then always be Batman!” I have tried to convince my children that I secretly am Batman. According to my son, he can smell my lies. Batman is my favourite superhero. I’m not sure which one of us was more excited when the “Fisher-Price Imaginext DC Super Friends Batbot Xtreme” arrived. 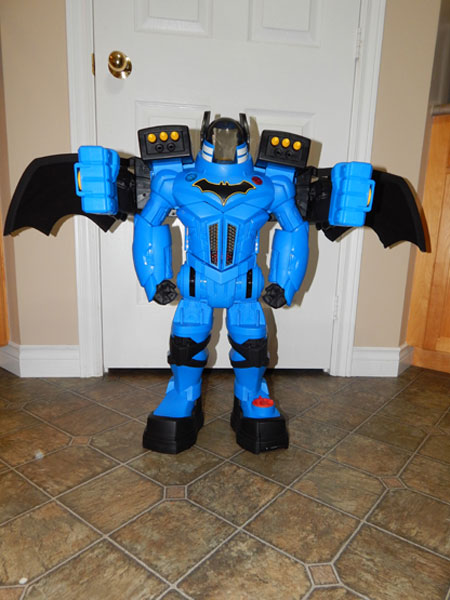 The “Imaginext DC Super Friends Batbot Xtreme” will capture the imagination of any little superhero. It stands over 2 feet high and 3 feet wide when the wings are spread out. It comes with Batman, a Batcycle (motorcycle), projectile launchers, punching fits and my son’s favourite – a voice changer.

The wings open by turning a red disk on Batman’s shoulder. Stand off to the side as they open with a bit of force and are much larger than you would expect. When you turn the red disk on the robot’s shoulder a secret door opens to reveal an elevator that will take Batman up to the cockpit where he can begin attacking the evil villains. 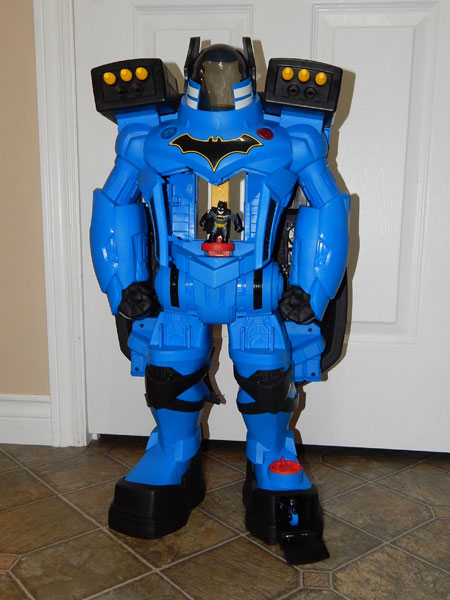 On both of the robot’s shoulders are projectile launchers. They are launched by pressing the red buttons on the top. Only the top row of darts shoot, the bottom row just stores the extras. I would suggest that you have a conversation on how to safely play with these. I was sitting in front of the launcher and accidentally shot myself in the face…thankfully I wear glasses and they stopped me from getting hit in the eye. These launchers shoot about two feet. 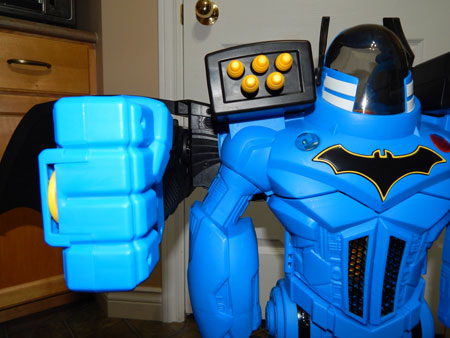 It also has fists that punch and work as a disk launcher. Be prepared to spend some time searching for these, they fire approximately 8 feet and slide. My son has already lost some of the pieces, we are down to 3 disks and 6 darts. 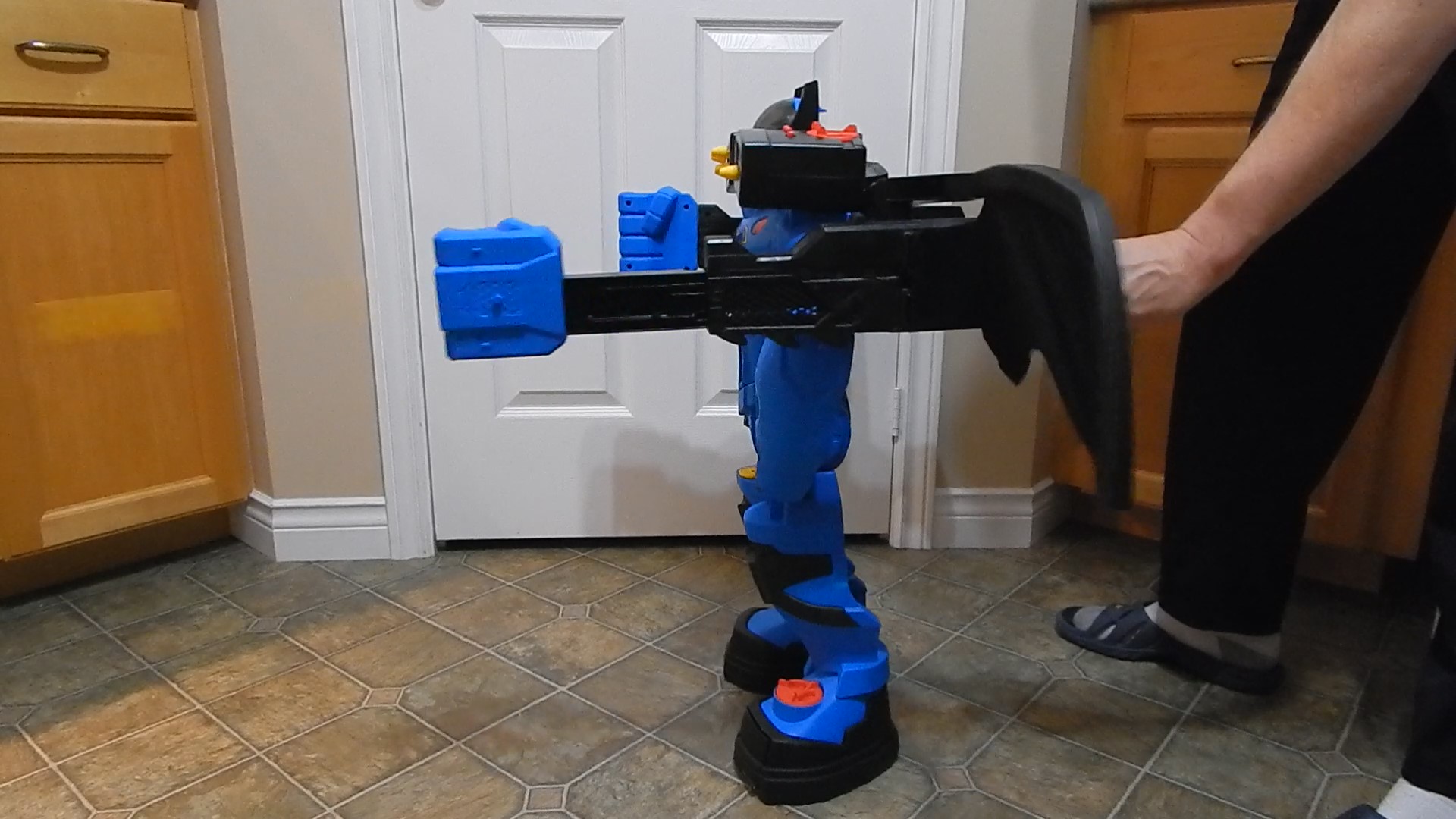 The back of the robot has little rooms to play in. They are small and really only hold one or two characters. The back of his heal is a cage, and in the front is where the Batcycle can be launched.

You turn on the voice changer by sliding the switch on the back to the on position. When you are ready you press the red button and it will be activated for approx 10 seconds. 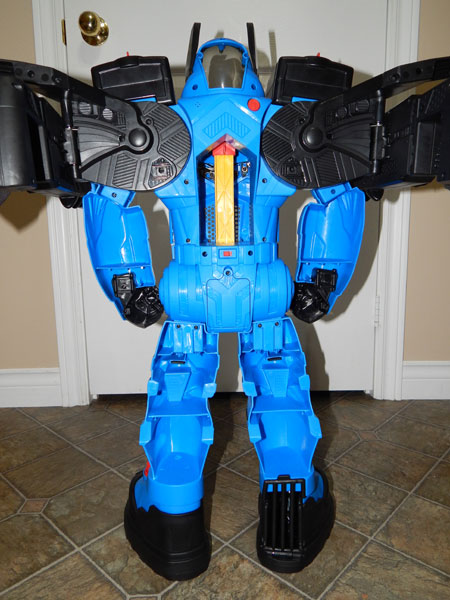 The toy has held up to some pretty rough play. I am unsure of what my son did to cause these marks on the toy, but overall it seems to be pretty durable. 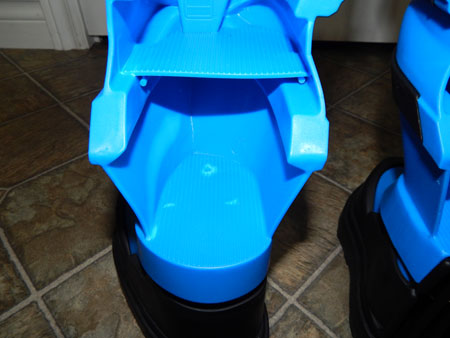 I dislike that you are unable to pose the arms and legs, they are immobile. With a toy of this size I was expecting a little more in terms of movement. It also seems to lack some of the bells and whistle of other Imaginext sets in terms of action figure play. My son spends most of his time shooting the projectiles and uses the action figures in his other sets. If the robot moved, or even had wheels to move across the floor I think it would hold his attention more.

Thankfully the punching arms and wings fold in for storage. The “Batbot” is still quite large, but does stand nicely up against a wall when not in use.

The “Imaginext DC Super Friends Batbot Xtreme” has a definite wow factor when it is first opened, but interest definitely wanes over time. For my son the biggest draw of the toy is the voice changer and the projectile launchers.

Disclosure: I received a complimentary “Imaginext DC Super Friends Batbot Xtreme” through the Amazon Vine program in exchange for my review. All opinions are 100% my own.