My daughter loves to play with her her dolls. She has her favourite doll and she is her best friend and guide through a world that can seem big and scary at times. The “BABY ALIVE Super Snacks” baby doll has quickly become a new playmate for my daughter and they have spent many hours playing together. 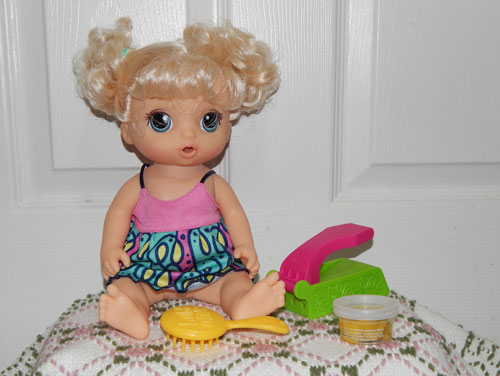 The “BABY ALIVE Super Snacks” baby is an adorable baby doll that has taken playtime to the next level. She talks, eats and even poops in her diaper! She comes with 5 different accessories including: noodles extruder, 1 can of solid food, bowl, diaper and hair brush.

Traditionally dolls are thought of as “girls” toys and Hasbro has busted through this wall by creating a “Mommy” and “Daddy” experience for your little ones. There is a button on the back that easily switches the doll’s conversation to interact with Mom or Dad. I love this feature as it encourages both my children to play with the doll, but it would be nice if it also came as a boy doll as I know my son would be uncomfortable carrying a “girl” doll around.

The doll speaks two languages – English and French. There is a button on her belly that you simply hold in for 5 seconds to get the doll to switch between the two languages. This is an amazing feature as my children are currently learning french and it encourages her to play using her french language skills. 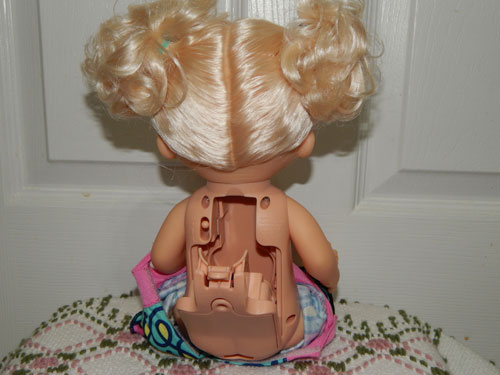 My little girl loves to feed her dolls. The “BABY ALIVE Super Snacks” comes with a dough and an extruder that allows you to make your own noodles. They are easy to make, simply place the dough into the extruder and press down and the noodles come out. You get three noodles at a time, ready for your doll to eat! The doll also comes with a noodle bowl so you can serve your doll in style, but we have misplaced our bowl already. 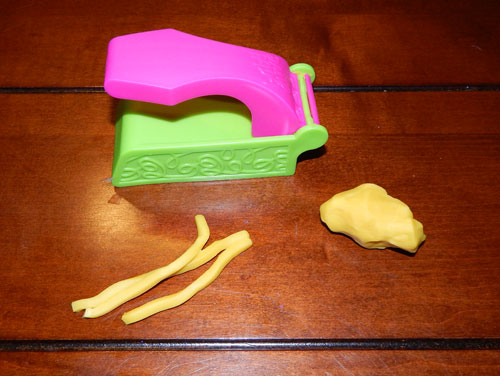 To feed “BABY ALIVE Super Snacks” you simply place one end of the noodle in her mouth and she will slurp it back. We learned very early on that you must feed the doll while it is in an upright position, otherwise the noodles get stuck. If this happens you can open up the back of the doll to remove any noodles that may be stuck. Sometimes she refuses to eat, and we found that we had to flip the noodle around or lay the doll back for a moment and sit her up again and she will eat. 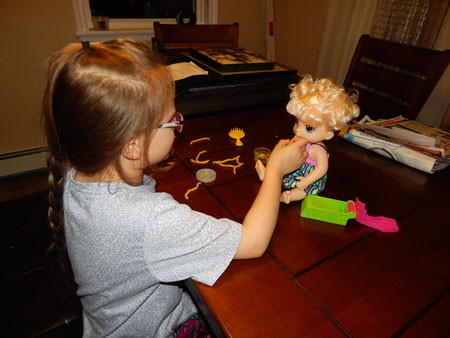 My daughter had asked for help removing some noodles that were stuck in her doll. I said that I would help and like the great mom I am, I forgot about it until three days later. When I opened the back of the doll I discovered a dried mess of noodles. The instructions that come with the doll say to add a drop of water to the dried noodles to reconstitute them. I wasn’t convinced that this mess was worth saving but I decided to try. I placed the dried noodles in a bag with some water and started squishing them. It took about 4 hours but I saved the dough!

The instructions also say to only use the Baby Alive dough with the doll. I have to admit, I did try some other dough we had around the house and it worked just fine. The consistency of the dough is similar to the Baby Alive dough but I believe it would be more difficult to clean out if there was a jam. 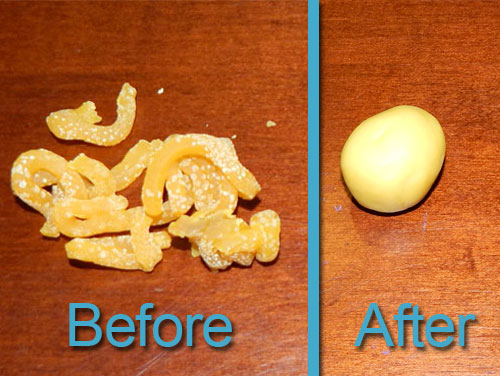 “BABY ALIVE Super Snacks” doll comes with single diaper so that you can learn to change her. The diapers don’t appear to be reusable, the tabs are very sticky and if you aren’t careful will rip the diaper. There are some very cool tutorials online to make your own cloth diapers. If you choose this option be sure that you pick a material that won’t leave lint on the dough. 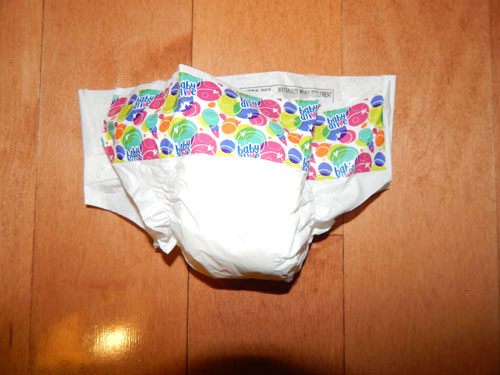 The  “BABY ALIVE Super Snacks” doll offers my daughter the opportunity to learn more about the world around her. She is learning how to care for another person, language skills, empathy and compassion and how to expand her imagination.

*Disclosure: I received a complimentary “BABY ALIVE Super Snacks” doll through the Amazon Vine program in exchange for my review. All opinions are 100% my own.