Winter will be here before we know it and that means snow days and board games. It’s hard to find a game that will entertain everyone in the family. “Speak Out” is a hilarious game that has everyone wanting to join in on the fun! 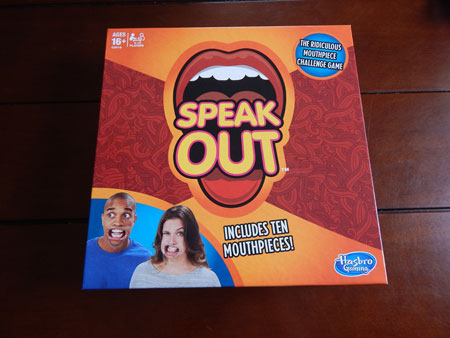 “Speak Out” is a game where players try to say different phrases while wearing a mouthpiece that prevents them from closing their mouth and pronouncing words correctly.

The game is easy to play. On your turn, put your mouthpiece in and then flip the timer over. Draw a card from the deck and read it out loud while your teammates try to correctly guess what you are saying. If they guess correctly they get to keep the card. Keep repeating this process until the timer runs out. Now it’s the other teams turn. After each player has taken two turns the game is over and the team with the most cards wins! 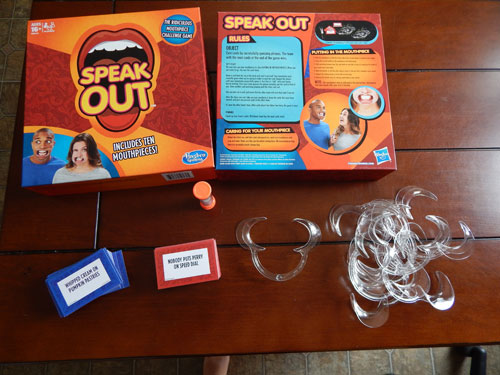 The game comes with everything you need to play. I has 10 mouthpieces so everyone can play alone, 1 timer and 200 double sided cards.  Each card contains a silly phrase for you to say like, “Purple is my favourite smell” or “Boring people make me yawn”. 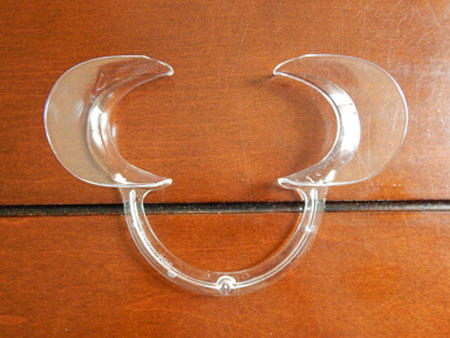 The game is designed for players ages 16 and older. The mouth pieces are large and not suitable for younger players. If younger children want to play I would strongly recommend purchasing smaller mouth pieces for them. Be sure to wash the mouth pieces after you finish playing. I would also recommend having some napkins close by as people tended to drool while playing.

Even though my kids couldn’t wear the mouth pieces that came with the game, but they still enjoyed playing along trying to guess what we were saying. We tried using your hands and tone of voice to help our teammates understand what we were saying. By the end of the game we were all laughing and having a great time.

If by chance you have played through all the cards and remember what they are, it would be quite easy to create your own phrase cards to use to play.

“Speak Out” is a hilarious game that will bring friends and family together for a night of fun and laughter.

Disclosure: I received a complimentary “Speak Out” game from “Amazon Vine Program” in exchange for my review. All opinions are 100% my own.