“If a man does not keep pace with his companions,
perhaps it is because he hears a different drummer.
Let him step to the music which he hears,
however measured or far away.”
Henry David Thoreau

We all know that one woman who doesn’t dance to the same music as the rest of us. When the world says she can’t, she says she can. “The Elusive Miss Ellison” is such a woman, she dances to the beat of her own drum. 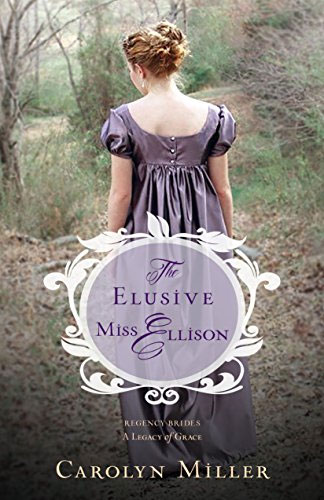 “The Elusive Miss Ellison” is the story of Lavinia Ellison, a ministers daughter who doesn’t always play by the rules. She isn’t above getting herself dirty in order to help those less fortunate and she is known for her outspoken opinions.  When Lavinia meets the Nicholas,  the new Earl of Hawksbury, their personalities clash.  Lavinia believes him to be arrogant with little regard for the welfare of his tenants on his estate.

Guilt, family obligations and the legacy of war have called Nicholas home. He never believed that his cursory visit would turn his world upside down.  Lavinia challenges him see the need of his tenants and look past his preconceived notions.  Can Lavinia and Nicholas look beyond painful pasts and present prejudice to see their future? And what happens when Lavinia learns a family secret that alters everything she’s ever known?

“The Elusive Miss Ellison” written by Carolyn Miller is set in St. Hampton Heath, Gloucestershire, England in 1813. A time when class distinction was clear. The story makes us question do we help others because we want to, or simply to help ourselves? As Nicolas learns, when he helps those on his estate he in turn helps himself. And so it reflects in our own lives. When we help another who needs it, something in us changes. Our hearts change and we begin to see others in a new light.

The story shares a message of forgiveness and God’s grace. Lavinia needs to look inside herself to forgive those she feels responsible for taking away the person she loved the most. Nicholas needs to learn to forgive his brother and himself.

With vivid descriptions of the English countryside and London and intriguing historical detail, Ms Miller, transports you back to Regency England. You will find yourself lost in a story of forgiveness, love and God’s grace.

I received a complimentary copy of “The Elusive Miss Ellision” from Kregel Publishing in exchange for my review. All opinions are 100% my own.