This afternoon we went on an amazing adventure. We bundled the kids up and headed off to explore “Little Ray’s Reptile Zoo”. The kids were excited to be able to see up close the different creatures that grace our planet. 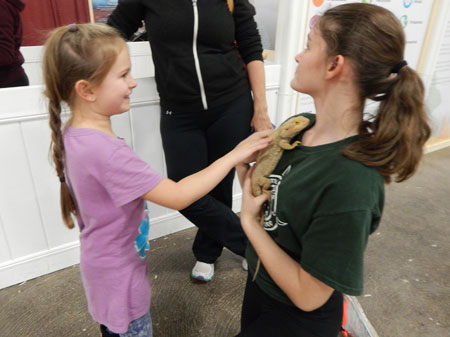 “Little Ray’s Reptile Zoo” is a privately funded zoo and animal rescue. It was founded and owned by husband and wife team Paul and Sheri Goulet, and in 2008 the zoo’s curator, Matthew Korhonen, also became a partner.

Approximately 80% of the animals in their care are rescued, seized or unwanted pets. The love that they share with these creatures is beyond anything I can describe, you can see the love and care in how each Handler works with their assigned animal. They do have some animals that are captive bred at other zoos but the majority are unwanted pets. They also release 100% of the animals that can be released, but sadly it is very limited when they can. They do relocate animals into the pest possible scenarios, and most importantly they do NOT take any animal from the wild to use in any of their programs.

The “Diversity of Living Things” is Little Ray’s Reptile Zoo’s largest exhibit. It is an incredible exhibit where children can explore the creatures that we share this world with. My children were encouraged to ask questions and share their experiences with the critters that they were seeing. Education is an important part of each exhibit. They put on several shows, each showcasing different animals. The presenters are incredibly knowledgeable and happy to share their knowledge with the children. 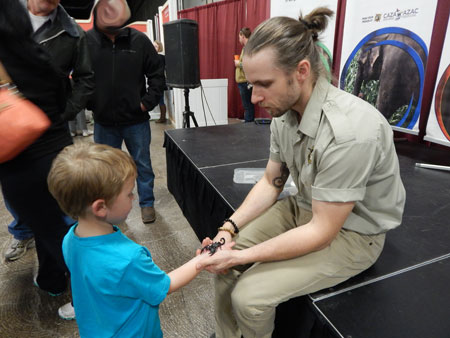 At the exhibit my children were able to see a tarantula, skunk, barn owl and kangaroo and even touch a crocodilian and giant snake. My son was able to hold a scorpion in his hand (with a little assistance). He was terrified and yet curious to discover how it felt on his hand. His beliefs on whether or not it was dangerous were challenged. Again and again was amazed at how much care the handler’s have for the animals. He made sure that my son knew exactly how to hold the scorpion, and what to expect when it was placed on his hand. Not too fond of the creepy crawlies, my daughter was thrilled to see the dwarf bunnies, Guinea pigs and small birds. 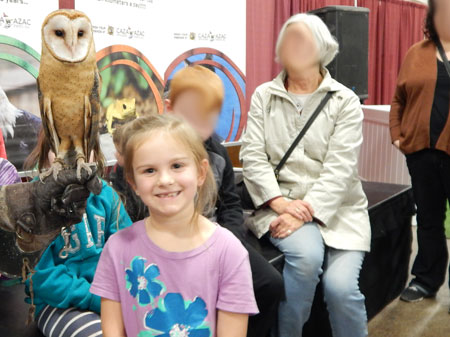 We weren’t able to touch the Barn Owl, but my daughter was able to get up close and see one. She was disappointed that she wasn’t able to touch his feathers, but the Owl’s handler made sure that she understood that it wasn’t good for the bird. My daughter has since come home and decided that she wanted to learn more about animals and how to care for them saying, “Mom, I think I may want to be a vet someday.” 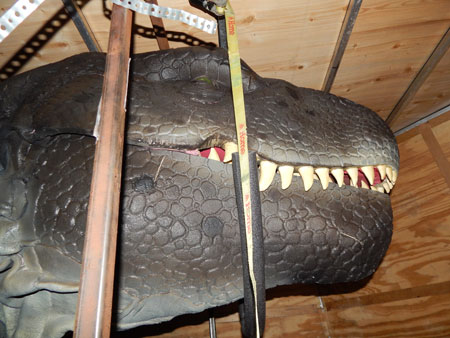 We also got to meet Rexy! He’s a 16 foot long T-Rex who walks around and interacts with your family several times throughout the day! You won’t want to miss this! It was a fun surprise to meet Rexy, he was designed by brother and it had been following his developments online. I had no clue Rexy would be here, so it was pretty cool to finally get to see this creation!

“Little Ray’s Reptile Zoo” is an amazing experience to share with your little ones. They get to touch and feel animals and explore the diverse world of ours all in one spot!