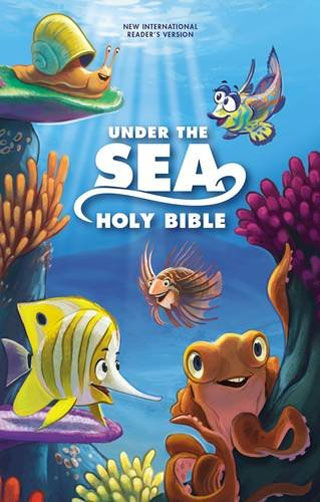 “Under The Sea Holy Bible” is ZonderKidz latest edition of the Bible for you younger readers. This Bible contains the complete text from – Genesis to Revelation and is the New International Readers Version.  It is geared to children between the ages of 6-10. It has a beautifully illustrated hard cover.  The fish and sparkles make it attractive to children.

I am not familiar with the NIrV version of the Bible, but I have grown up with the NIV.  The NIrV is based on the NIV Bible and uses that text where it could.  When the words in the NIV were to long or difficult to understand they used shorter and more easily understood words which is helpful to younger readers.

The text changes can be seen in John 3:16.
The NIV version reads as:

“For God so loved the world that he gave his one and only Son,
that whoever believes in him shall not perish but have eternal life.”
John 3:16

The NIrV reads as:

“ God so loved the world that he gave his one and only Son.
Anyone who believes in him will not die but will have eternal life.“
John 3:16

None of the meaning of the verse has been lost, but you can see that it is broken down into shorter sentences and easier vocabulary.  This makes it easier to understand and remember.

“Under The Sea Holy Bible” has a wonderful hardcover which makes it sturdy to carry around, but I find the pages very thin.  You can actually see the text on the reverse side of the page.  I do have my concerns about how well the pages would stand up to younger children or for people who like to highlight special passages.

Each chapter is divided into shorter sections with clear titles.  They have also done things like removed the word “Selah” from the Psalms as the Hebrew meaning of this word isn’t clear.  I am not a Biblical scholar so I can not say how this change affects the meaning of the text.  For my children at their ages, the removal of this world helps make the Psalms easier to read and understand. Sometimes the writers of the Bible have used more than one name for the same person or place, the NIrV version uses the most familiar name everywhere it would appear.

The Bible has a few special colour pages that are appealing for younger children.  They cover topics like the Books of the Bible, Prayer is…, The Lord’s Prayer, the Ten Commandments for Kids. The Back of the Bible contains a Dictionary and an index of Great Bible Stories.

Since this is a Bible children or new readers I would have like to see a reference at the beginning of each Book of the Bible explaining the “Who, What, When, Where and Why” that I have found in other versions.

“Under The Sea Holy Bible” wouldn’t be my first choice as a Bible for my children as it lacks some of the extra study guides that I have become accustomed to.  I would still keep it on my shelf though as it would be my choice of Bible to use in conjunction with our devotionals because of it’s simpler text.

For more information on the  “Under The Sea Holy Bible” please visit Zondervan Publishing.

“Disclosure (in accordance with the FTC’s 16 CFR, Part 255: “Guides Concerning the Use of Endorsements and Testimonials in Advertising”): Many thanks to Propeller Consulting, LLC for providing this prize for the giveaway. Choice of winners and opinions are 100% my own and NOT influenced by monetary compensation. I did receive a sample of the product in exchange for this review and post.