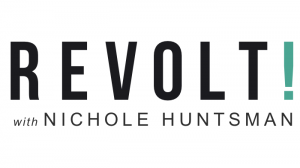 Summer is coming and I dread the thought of having to wear a bathing suit in public.  I knew that I was steadily gaining weight, but it didn’t really hit home with me until I went looking for a bathing suit and bought something that I can only describe as a “Mom Suit”.  You know the kind.  The ones that completely hides your belly with the skirt that goes down to your knees…At that point I knew I needed to do something.

When I saw the opportunity to try the Revolt 6 Week Workout Plan I thought that it would be perfect for me.  Back in 2009 I was in the best shape of my life.  I was training in Martial Arts 4 nights a week, and then was lucky enough to train in Okinawa for a month and was training 7 nights a week.  It was such a great feeling. I had all kinds of energy and  I honestly felt I was 10 feet tall and bullet proof.  Then I had kids, and that is when “the fat” happened. I am now 164lbs and none to happy about it.

So on to the Revolt!  Week 1 was a week of lessons, failures and success for me…

The first thing I learned that preparation is the ultimate key to your success. Nichole Huntsman, creator of the program suggests says in her ebook,

“I’ve found that the more we eliminate opportunities for failure,
the more successful we become.”

These words really ring true for me. Week 1 was the detox diet to cleanse the body of the effects of sugar.  I really wasn’t looking forward to this so I really did set myself up for failure .  This week I didn’t prepare my meals on Sunday as suggested, I figured I’d just make them as I need them. Monday morning was great in fact I followed the plan right up until 4pm…then I walked out the door and headed off to take my daughter to dance class.  We were running late so I stopped at a fast food place to grab something for daughter and I told myself that I wasn’t going to get anything and then I caved. I ended up eating a burger, fries and had a pop.  If I had been prepared I could have grabbed a prepped meal from the fridge.

Then on the afternoon of the second day the headache started and by the evening I was back to my old sugary eating habits.  By the end of the week I still wasn’t following the Detox diet, but I was making healthier choices.  In the end I lost absolutely nothing, but learned a valuable lesson in setting myself up for success!

The workouts were where I had my greatest success.  They were hard.  The first two days I could hardly move.  I hurt everywhere, but it was a good hurt.  There is a certain sense of satisfaction in knowing that you are working hard. Each time I wanted to stop, I just reached a little deeper inside myself and kept going.

One of the greatest things about the program is that I am able to workout on my own time. Working out to the video’s is great.  Nichole is very upbeat and the time passes quickly. The workouts are short enough that I am able to complete them during my son’s short nap, whatever time that may be.  No more excuses that I don’t have a sitter or time.

The facebook group has really kept me going on this journey.  It’s really encouraging to hear from people who are feeling like you do.  Without this group of people I don’t think I would be able to continue the journey to getting fit.

Week 1 has had it’s ups and downs.  Week 2 is about to begin and I know what I need to do to set myself up for success…

Disclosure: I received the products mentioned above for this review. No monetary compensation was received by me. This is my completely honest opinion above and may differ from yours.